The Koutoubia Mosque is the main landmark in Marrakech. You can see it from almost every square and it’s one of the unmissable Marrakech sights, with a minaret that stands 77 metres tall.

You haven’t been to Marrakech unless you’ve seen the Koutoubia Mosque. I mean this literally, as this Marrakech landmark is actually visible from almost anywhere in the city. Additionally, you can spot the minaret from further afield. On clear days, it’s even visible from 25 kilometres away. 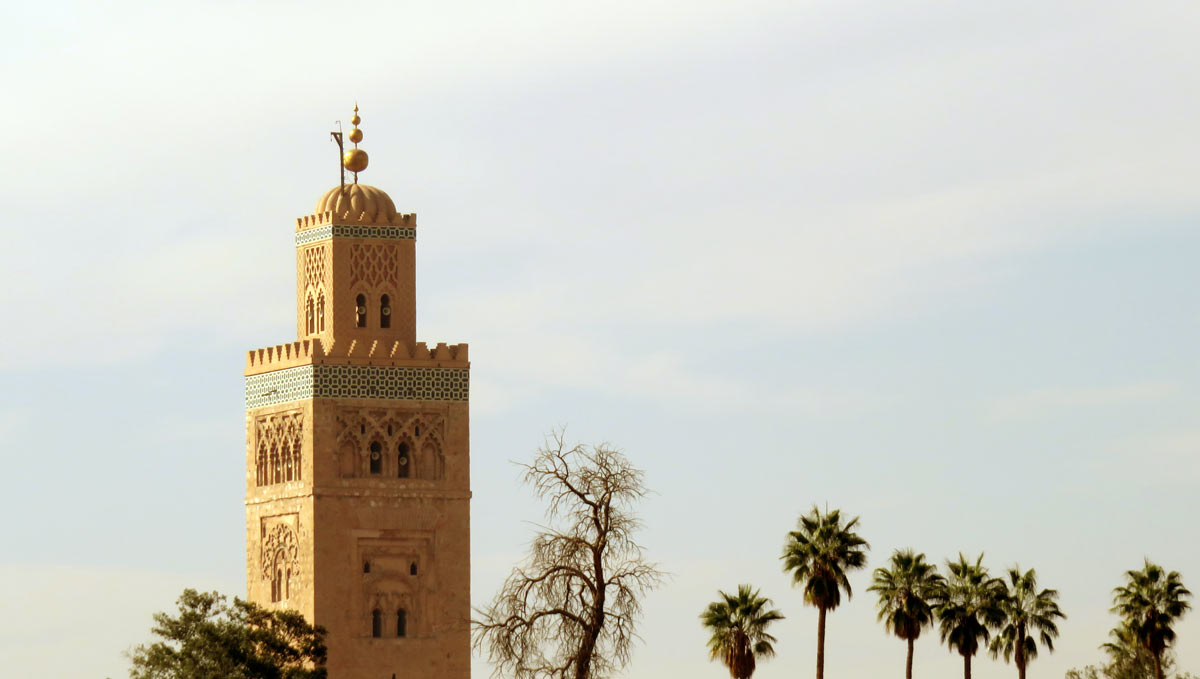 The Koutoubia Mosque is the main landmark in Marrakech (Photo: Travelguide Marrakech)

When visiting Marrakech, you’re bound to catch sight of this imposing monumental building sooner or later. If you ever get lost, it’s easy to find your bearings according to the minaret of the Koutoubia Mosque.

A considerable legacy and a bad planning mistake 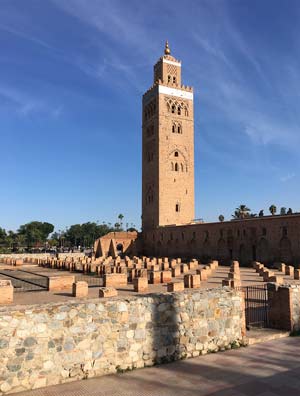 The Koutoubia Mosque (also Kutubiya or Kutubiyya) was built in the middle of the 12th century on the foundations of the Ksar el Hajar palace. This was constructed by the Almoravids under Ali Ben Youssef. However, the Almohad dynasty that subsequently ruled after conquering Marrakech in 1147 demolished the palace like so many other magnificent buildings in the city.

Under the rule of Abd al-Mu’min, the construction of the mosque began immediately. However, it was replaced by a new building shortly after inauguration because it was allegedly out of alignment. The original pillar and wall foundations from the first building were uncovered during excavation work by French archaeologists and partially reconstructed. They can be seen on the northern side of the current mosque.

Today’s Koutoubia Mosque was completed and inaugurated in 1158 under the aegis of Yacoub El Mansour. Back then, the minaret didn’t exist and work was only completed on this 40 years later, in 1199.

The design, architecture and construction of the Koutoubia Mosque

The construction of Koutoubia was largely inspired by the archetypal style of the hypostyle mosque. This is similar to the Great Mosque of Kairouan in Tunisia, which was built in 670 and has long been considered as an architectural reference by the Islamic world. Ceilings supported by multiple columns in large spaces are characteristic of this style. There’s a wide transverse nave aligned to the south end wall of the prayer hall and three wide central naves to the north that run perpendicular to the hall. The prayer room is a pillared hall with 17 parallel longitudinal naves and seven transepts. The big central nave alone has seven domes.

The Koutoubia mosque was built using rammed clay and rough-cut sandstones. It’s total floor space is 90×60 metres and it can accommodate 25,000 worshipers. 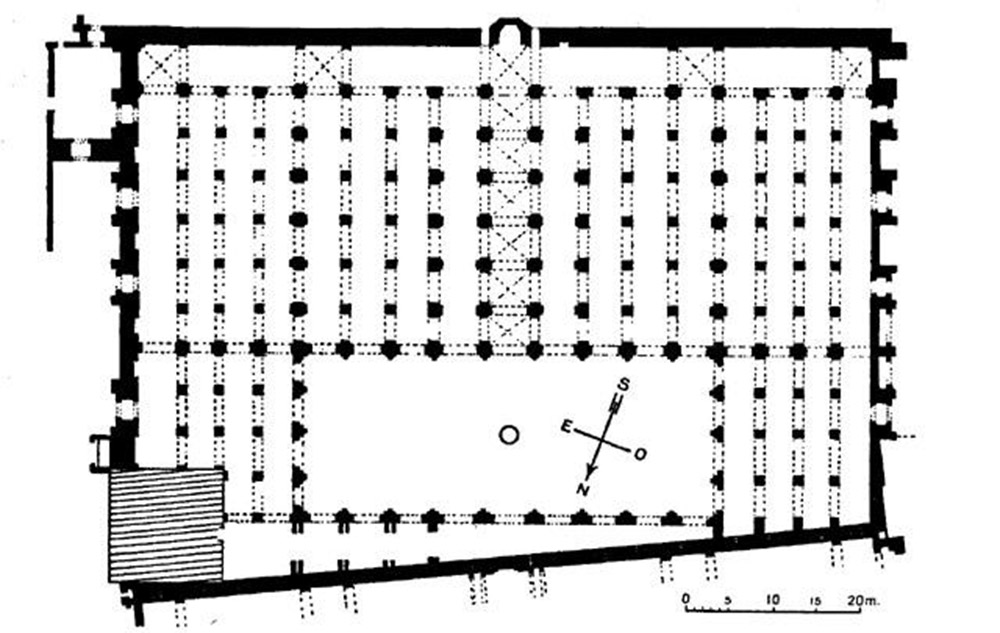 On horseback up to the minaret

The minaret of the Koutoubia Mosque stands 77 metres tall and has six floors, connected by sloping ramps inside the tower. These are so generously proportioned that you could ride up the path to the terrace of the minaret on horseback. Yes, that’s right: The Koutoubia is built to allow you to ride into the tower on a horse. So, to say that this an early type of lift isn’t a inflating the truth.

The upper section of this 77-metre high tower has a 2-metre frieze of green mosaic tiles that envelop the minaret. Upon this stands a secondary tower with a smaller base. This smaller tower is known as a lantern. On each side are two arches with windows, decorated in a distinctive diamond pattern and above these, another band of mosaic tiles. At the tip of the lantern is a ribbed cupola.

A Jamur extends from the top of the minaret (in the shape of an arrow, piercing 3 golden brass balls). The green flag of the Prophet is hoisted up here before Friday prayers and religious holidays. The 10th Century minaret of the Great Mosque of Cordoba has similar balls, which can also be seen on almost all the major mosques of the Islamic world. Often, they’re accompanied by a crescent moon at the pinnacle.

The historical artistic significance and symbolism of the Koutoubia Mosque

The three balls are all made from the jewellery of Yacoub el Mansour’s wife and there are different interpretations as to the significance of these. On the one hand, they symbolise the three most significant Arab mosques: The Al Haram Mosque in Mecca, the Prophet Mosque in Medina and the Al Aqsa Mosque in Jerusalem. On the other hand, they represent the three elements of life: water, air and fire.

The prayer pulpit (Minbar) that was used until the 1960s also needs a mention when talking about the Kouotubia. It was made in Cordoba, Spain in the 12th Century. The Minbar has now been extensively restored and, since then, has been on display in the El Badi palace. 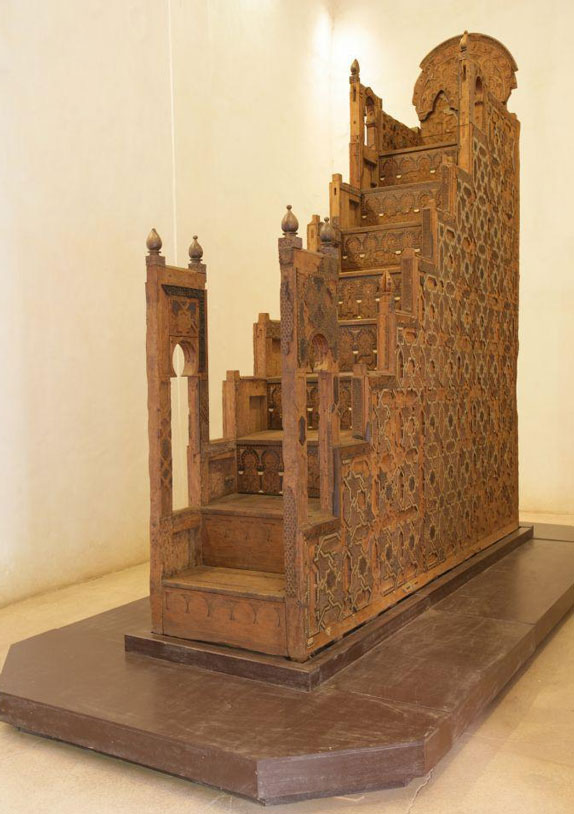 You can see the Minbar from Koutoubia in the El Badi Palace (Photo: Discover Islamic Art)

Incidentally, the Koutoubia Mosque, which was renovated in 1997, is said to have inherited its name from the bookseller, Souk Kutub who once operated near this place of worship.

Can non-Muslims enter mosques in Morocco?

Unfortunately, in Morocco, non-Muslims aren’t allowed to enter mosques. The only exception is the mosque named after the former King Hassan II in Casablanca, one of the largest places of worship in the world.

This ban isn’t a Muslim invention but was adopted by French colonial rulers in the 20th century. The only rule in the Qur’an relating to this ban concerns the holy mosque in Mecca. According to Sura 9, unbelievers may not enter this mosque. When it comes to applying this prohibition to other mosques, people from other monotheistic religions, such as the Christians or Jews, are generally not considered infidels. This is also recorded in Sura 9. 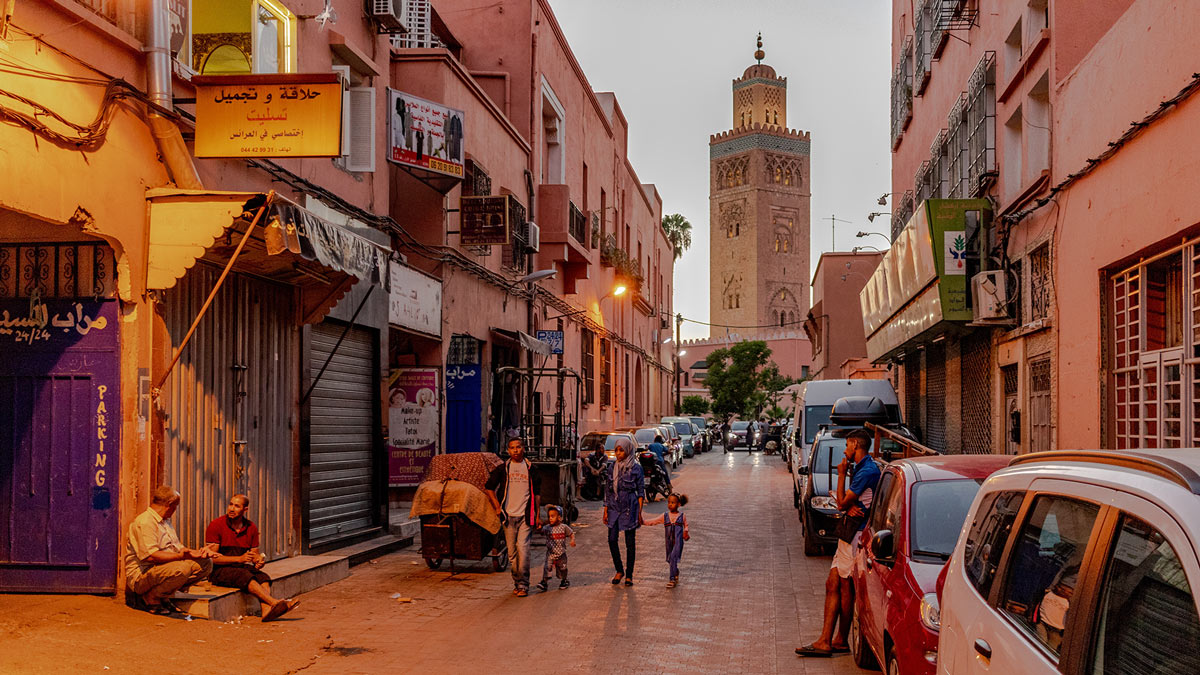 The Koutoubia mosque is visible from almost everywhere in Marrakech and is always a good landmark to use to get your bearings. (Photo: Jimmy JAEH, Unsplash)

Hubert Lyautey enforced a legal prohibition on non-Muslims visiting Moroccan mosques. The Frenchman was appointed Resident-General of Morocco in 1912. He pursued a policy of segregation and strove for a strict spatial and cultural separation between native Moroccans and French colonialists. Lyautey also commissioned the construction of the New Town (Ville Nouvelle) in Morocco. This was designed as a residential and business district for the Europeans and to help with ethnic separation.

The Koutoubia Mosque is located on the edge of the medina at the beginning of Avenue Mohammed V. The easiest way to reach it is on foot from Jemaa el Fna. It’s just 250 meters from the main square. Simply leave the Djemaa el Fna on the road to the southwest where the horse-drawn carriages wait and you’ll come to it straight away. 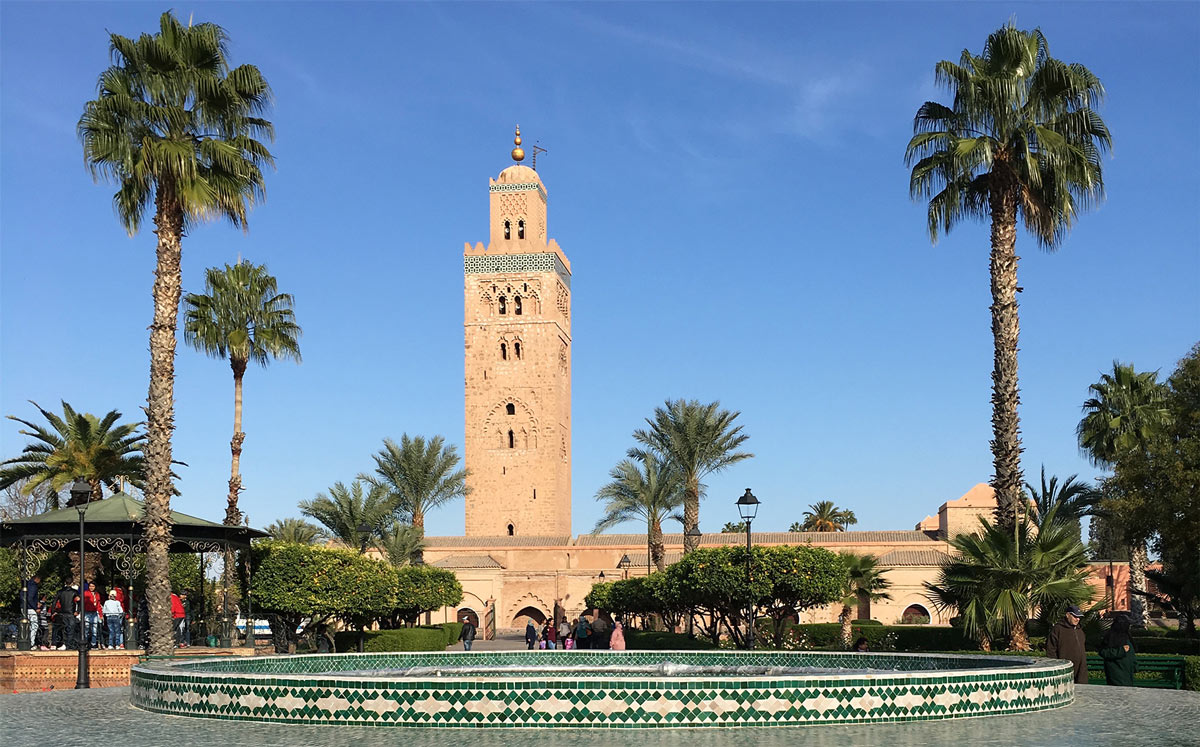 View from the Lalla Hasna park to the Koutoubia Mosque

When you’re finally standing in front of the mosque, take the opportunity to walk around this monumental building. This really helps to gain an impression of the gigantic size of Koutoubia. Behind the mosque is the Lalla Hasna park, which blends perfectly with the mosque’s visual aspect. Have a rest on one of the several benches that are ideal for a short break. In addition, you can take photographs from here in peace. Otherwise, almost all of the rooftop terraces in the medina are suitable for panoramic photographs with the Koutoubia Mosque as a feature.