Anybody traveling to Marrakech in order to experience the Orient will strike gold on the Jemaa el Fna. The tales of the “Arabian Nights” seem to come alive among snake-charmers, story-tellers, acrobats, and performers on the “Assembly of the dead”.

Jemaa el Fna is located in the middle of the Medina. Legend has it that during the rule of the Almohads public executions took place on this site and the severed heads of the executed were impaled and put on display here. 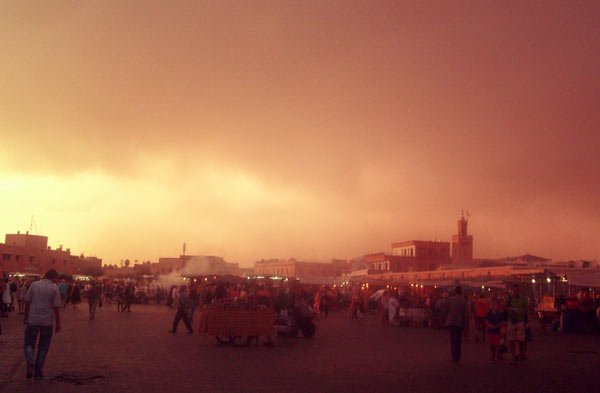 The two faces of the Jemaa el Fna

Nobody will lose his head on the “Assembly of the dead” today, but one may well lose one’s heart there. Jemaa el Fna is pulsing with life, and always in motion. Snake-charmers and monkey trainers try to draw the attention of curious onlookers – but they are without a chance in the presence of the acrobats who show their breakneck acts high above the ground a few steps apart, accompanied by the dramatic drum beats of some Berber musicians.

A bit further, there is one of the famous story-tellers who entertain the crowd using countless requisites. An orange juice vender whistles and beckons people to come to his stand. With some freshly pressed juice in your hand, you can comfortably take in the extent of this spectacle. As the afternoon approaches, Jemaa el Fna is turning into a huge open-air restaurant. 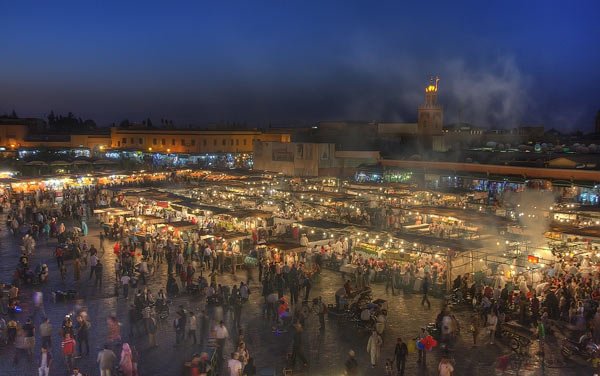 When the makeshift food stalls are put up all over the place, it does not take long for the first wads of smoke to rise and Jemaa el Fna is shrouded in the aromas of charcoal, barbecued meat and exotic spices. The daily spectacle is about to start and will have gained momentum by sunset. Meanwhile, the place is crowded with people gathering around the story-tellers and acrobats who are now performing in the light of small gas lamps.

Only a few meters away, there is more light. Here, the famous food stalls invite people to linger. They present the highly praised Moroccan cuisine on opulently arranged beds of coriander. Meat skewers, barbecued vegetables, fish, couscous, tajine dishes, and savory pastillas are available, but also dishes that are hardly known in Europe. Once one has sat down next to one of the food stalls, one can sample everything without hurry. Just like Spanish tapas, the dishes are served in small portions, so that everybody can assemble their own delicious menu. 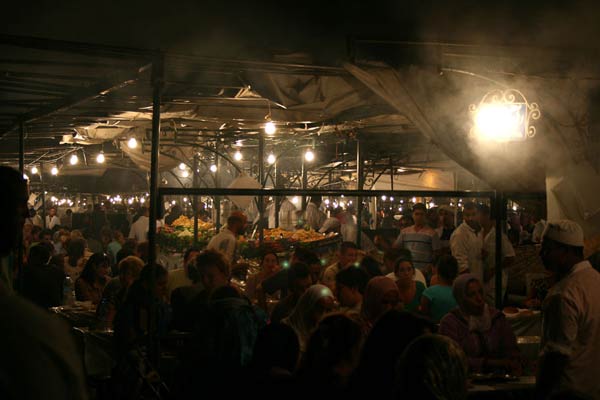 Jemaa el Fna in a Nutshell

Jemaa el Fna is to Marrakech what sugar is to mint tea. Blame yourself if you miss out on this oriental spectacle, this crazy blend of aromas, sounds, and dishes! In 2001, the special atmosphere in this place has been classified as immaterial world cultural heritage by the UNESCO. Today, it is appreciated by tourists as well as locals. Thus, there is a good chance that you will eat in the merry company of Moroccan families at the food stalls.

This video shows the nocturnal hustle and bustle on Jemaa el Fna in fast motion.

Jemaa el Fna is right in the center of Marrakech’s Medina, and all bigger alleys pass the site sooner or later. If you have lost your way, it won’t take long until you hear a “A la place?” and someone will show you the right direction. Along the bigger streets next to the square, you can find ATMs of various banks, as well as more makeshift food stands and restaurants. If you want to take pictures, try the terrace of one of the multi-storey cafés at the east side for a good overview.