For a very long time, the Saadian tombs were walled in and forgotten about. However, since their rediscovery, the mausoleums of the mighty dynasty have been among the main attractions of Marrakech. But there’s a catch to visiting these tombs.

Just like the entire Medina, the Saadian Tombs are a UNESCO World Heritage Site. The historic tomb complex consists of two magnificent mausoleums and is now one of the most popular sights in Marrakech. The complex houses the tombs of seven sultans in total and 62 family members of the Saadian dynasty. This dynasty ruled in Morocco from 1549 to 1659. Under their reign, Marrakech rose to become the seat of government in 1554.

The grave monuments connect to the back of the Moulay El Yazid mosque (formerly the Kasbah Mosque). The entrance to the tombs lies hidden to the south of the mosque. There’s a special reason for this inconspicuous location; but more on that later. Today, the Saadian tombs are open to the public again and the craftsmanship that went into building them shines in all its former glory.

An oriental garden surrounds the two mausoleums that dominate this complex. This contains over one hundred other tombs of judges, soldiers and, nearby, their servants. In addition, several Jewish advisors were buried there. They held the trust of the Sultan and took on high positions. 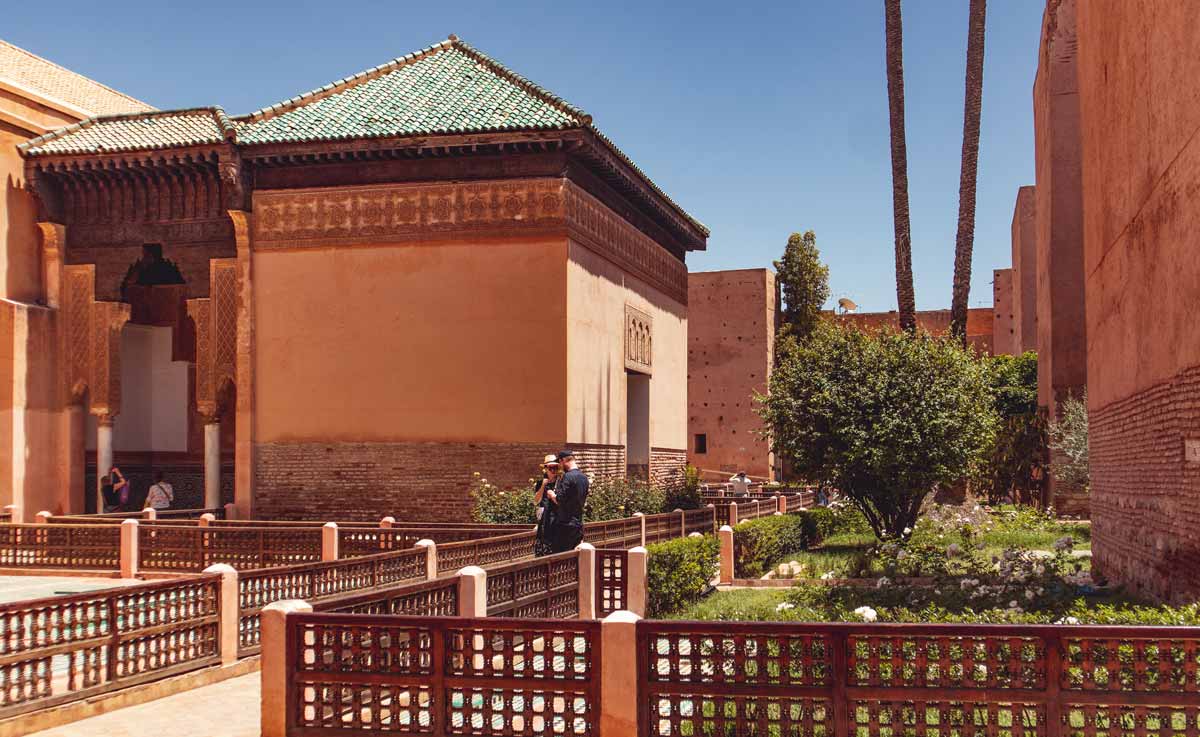 The smaller of the two mausoleums; this is where Lalla Massouda is buried, the mother of Sultan Ahmad al-Mansur.

The history of the Saadian Tombs

Originally, the site of the necropolis was just the garden of today’s Kasbah Mosque, but centuries before the reign of the Saadians, several emirs were buried there, as well as the Meriniden-Sultan Abu l-Hasan. After 1557, Ottoman agents killed the first Saadian Sultan, Mohammed ech-Cheikh. He too was buried on the site. Later, his son Abu Muhammad Abdallah al-Ghalib had a real tomb built and was himself buried there in 1574.

In 1578, Ahmad al-Mansur became the new ruler. He was the fifth and most famous sultan of the Saadian dynasty. Al-Mansur led Morocco into an economic and cultural boom, and trade flourished with England and other European states. Trans-Saharan trade also grew rapidly growing.

After seizing power, al-Mansur didn’t waste and time and quickly began to expand the entire burial ground. While this was being completed, he also had the two magnificent mausoleums built for the graves of his father, his mother, his own descendants, and of course, himself.

Moulay Ismael and the end of the Saadian Tombs

Ahmad al-Mansur died in 1603 during an epidemic of the plague. His death marked the end of the great Saadian dynasty. As the Alawids began to extend their powerful influence, the Saadian tombs quickly fell into decay.

In 1672, the Alaouite Sultan Moulay Ismail competed against his 83 brothers and half-brothers in the struggle for taking over the throne. Moulay Ismael was known to be “blood thirsty,” and an unpredictable sadist. He arbitrarily sentenced people to death, adorning the heads of his decapitated victims on the city walls. Historians estimate that more than 30,000 people lost their lives this way.

However, Moulay Ismail is also said to have had a particular weakness for women. As a result of countless adventures with his four wives and over 500 court concubines, it’s thought he fathered a total of 888 children, which has been recorded in the Guinness Book of World Records. In 2015, two German evolutionary biologists were awarded the Ig Nobel Prize for their research on Moulay’s reproductive behaviour.

Like many other rulers, after assuming power, Moulay Ismael began to get rid of the legacies of his predecessors and gradually eliminated them all together. This is why he had buildings from the Saadian era destroyed such as the El Badi Palace — a classic case of symbolic power politics. Indeed, there are numerous examples in Europe.

Given his unscrupulous work, it’s very surprising that Moulay Ishmael stopped his earnest path of destruction before he got to the Saadian tombs. Apparently, the sultan was worried about committing sacrilege by demolishing them. So, Ismael had the entire burial ground walled into a small hidden passageway. Unlike many other structures, fortunately, the Saadian Tombs survived the Alaouite dynasty. 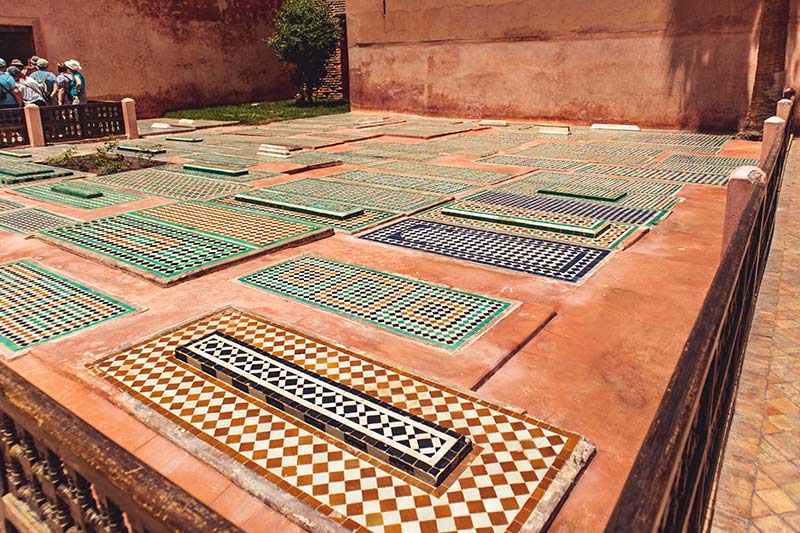 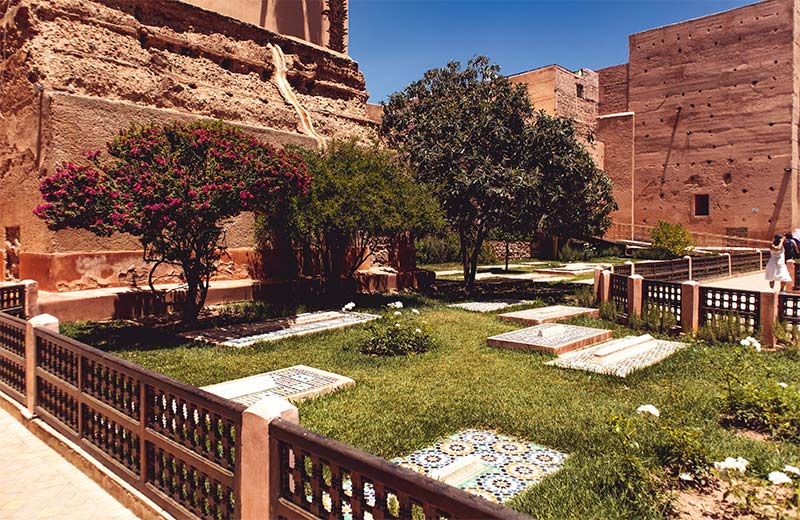 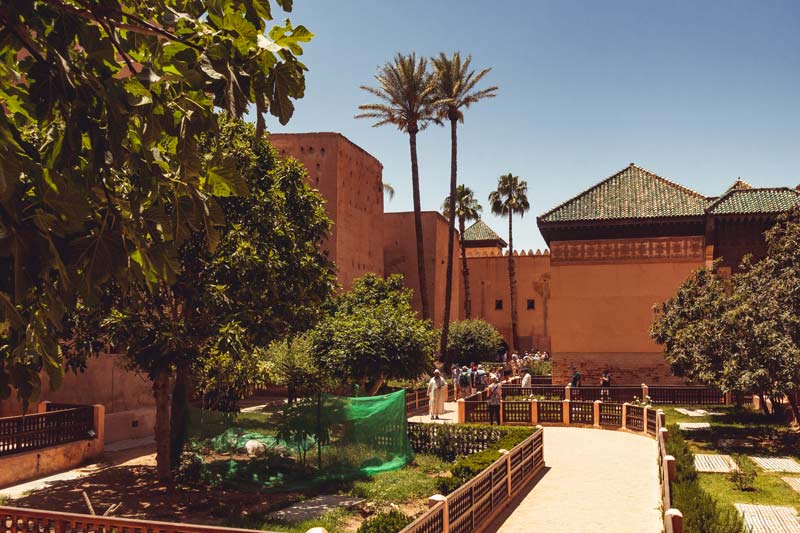 A chance rediscovery of the tomb

By the end of the Saadian dynasty, the tombs had gradually fallen into oblivion. Slowly but surely, they were forgotten about by the city down to the very last trace and lay dormant for more than two centuries, becoming rapidly overgrown. In the end, they were only home to stray cats and storks from the nearby El Badi palace.

At the start of the 20th century, the tombs were unexpectedly rediscovered. In 1917, the French General Resident Hubert Lyautey commissioned aerial photographs of Marrakech. These showed the ruins of the site and, when taking a closer look, General Resident Lyautey recognised the cultural importance of the Saadian tombs and restored them. It wasn’t long before the Saadian Tombs were restored to their former glory and could open to the public again.

The construction of the Saadian Tombs

The Saadian Tomb complex is completely surrounded by the typically simple Marrakesh rammed clay walls. These magnificent tombs consist of two mausoleums and are decorated with precious mosaics, inlaid Carrara marble and ornate stucco decorations. They’re surrounded by an oriental garden and this green space forms the harmonious backdrop to the different buildings, blending them as a whole and giving the entire complex a calm and contemplative feel. 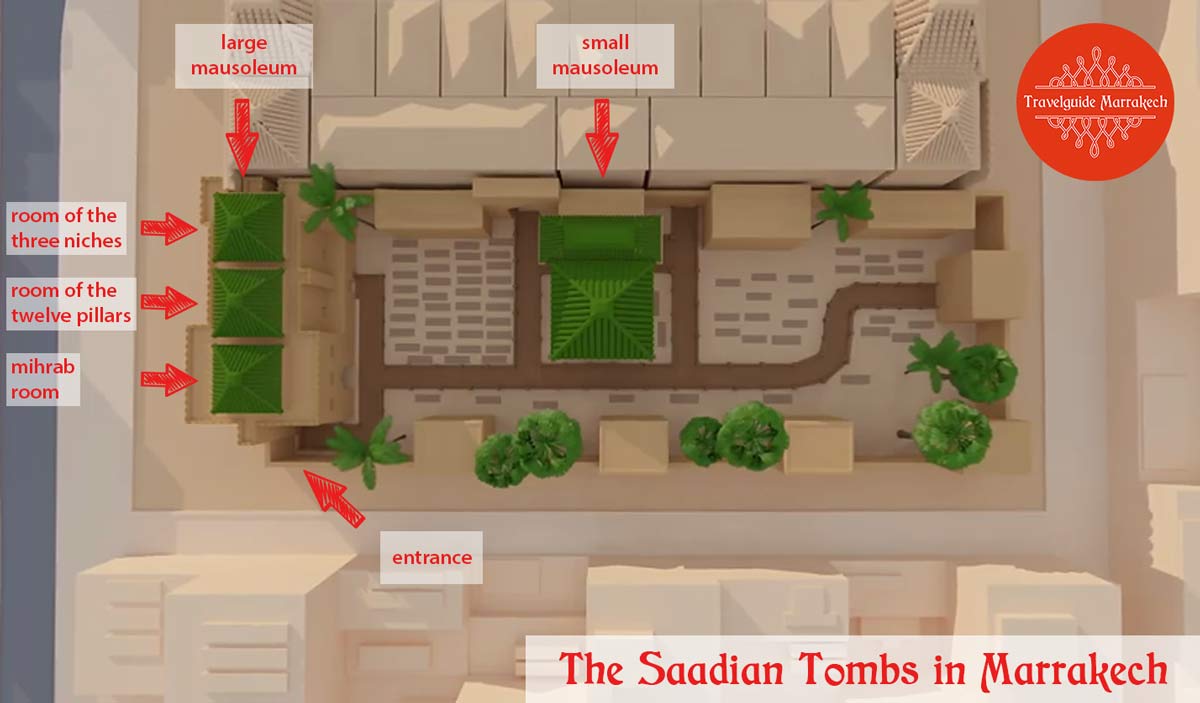 Diagram of the construction of the Saadian Tombs

At the eastern end of the Saadian tombs, there’s a small exhibition where historical photographs of the mausoleums are on display, thanks to a collaboration with Maison de la Photgraphie. There’s also a film about the restoration of the grave monuments.

The first and larger mausoleum lies to the west of the complex. It’s divided into three interconnecting rooms: the Mihrab Room, the Room of the Twelve Pillars room and the Room of the Three Niches room.

The Mihrab Room features an elaborately decorated prayer niche, which faces Mecca. The room was initially used as a prayer room and the Mihrab has a horseshoe-shaped arch, similar in height to the passageway out to the middle hall. It’s surrounded by an ornamental Alfiz and this kind of framing is typical of Islamic architecture.

The four central marble columns divide the space into different sections and are crowned by horseshoe-shaped arches finished in white plaster. Between these arches are seven domed roofs covered with cupolas. To the northern side, you’ll also find a small dome-shaped lantern. 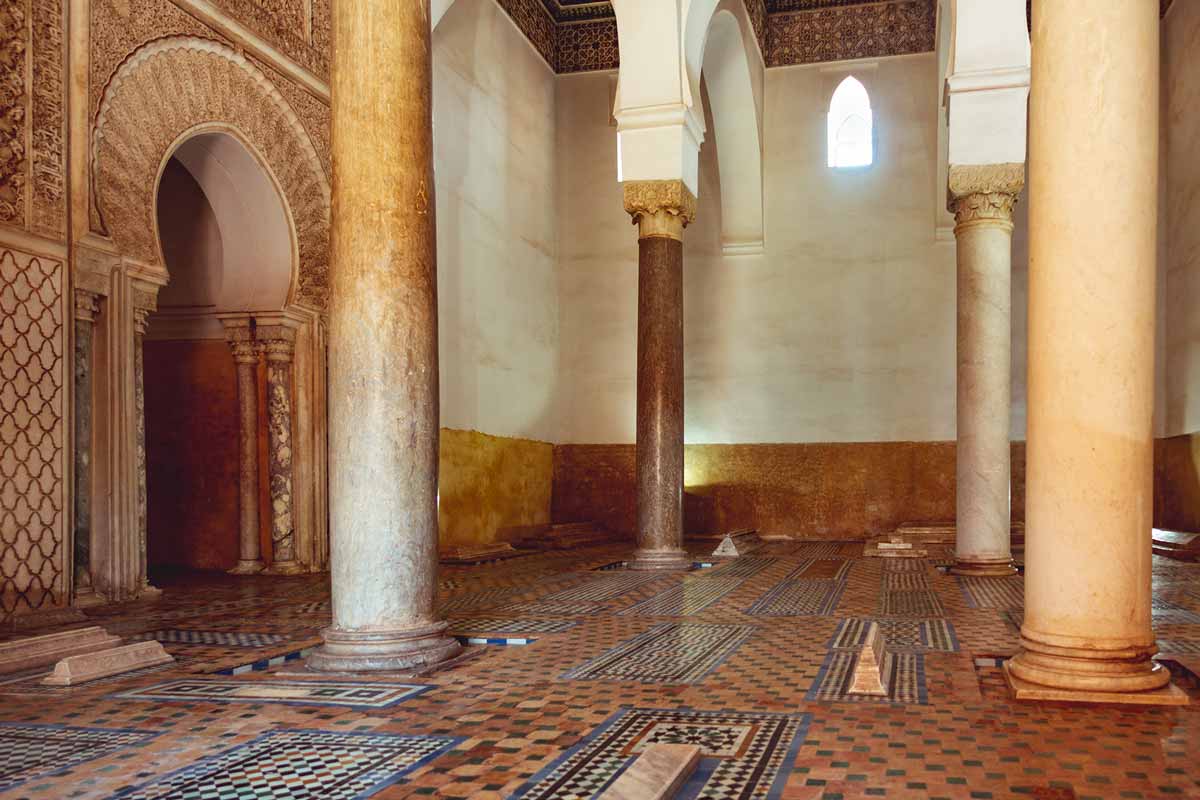 Not only does the Mihrab Room house the marble tombs of several Saadian princes, but the Alawiden ruler Moulay El Yazid was also buried here. He’s one of the few to be buried in the Saadian Tombs after Moulay Ishmael’s reign. Yazid was known as “the crazy sultan” and only ruled for two years (1790-1792), his reign marked by a devastating civil war.

The Room of the Twelve Pillars

The most magnificent room in the first mausoleum is the “Room of The Twelve Pillars”. This sumptuously furnished hall with its square layout is at the very heart of the complex. The remains of the Saadian Sultan Ahmad el-Mansur lie here and his tomb is flanked by the coffins of his sons.

An elaborate cupola crafted from cedar wood, partially gilded and painted, spans the middle of the room. It’s perched on 12 large pillars made of Italian Carrara marble. Lozenge-patterned gusset reinforcements connect the group of columns. Along with the fine stucco features, they form an impressive ensemble of Moorish-Andalusian architecture. A strange kind of light partially illuminates this space and creates a particular kind of atmosphere. 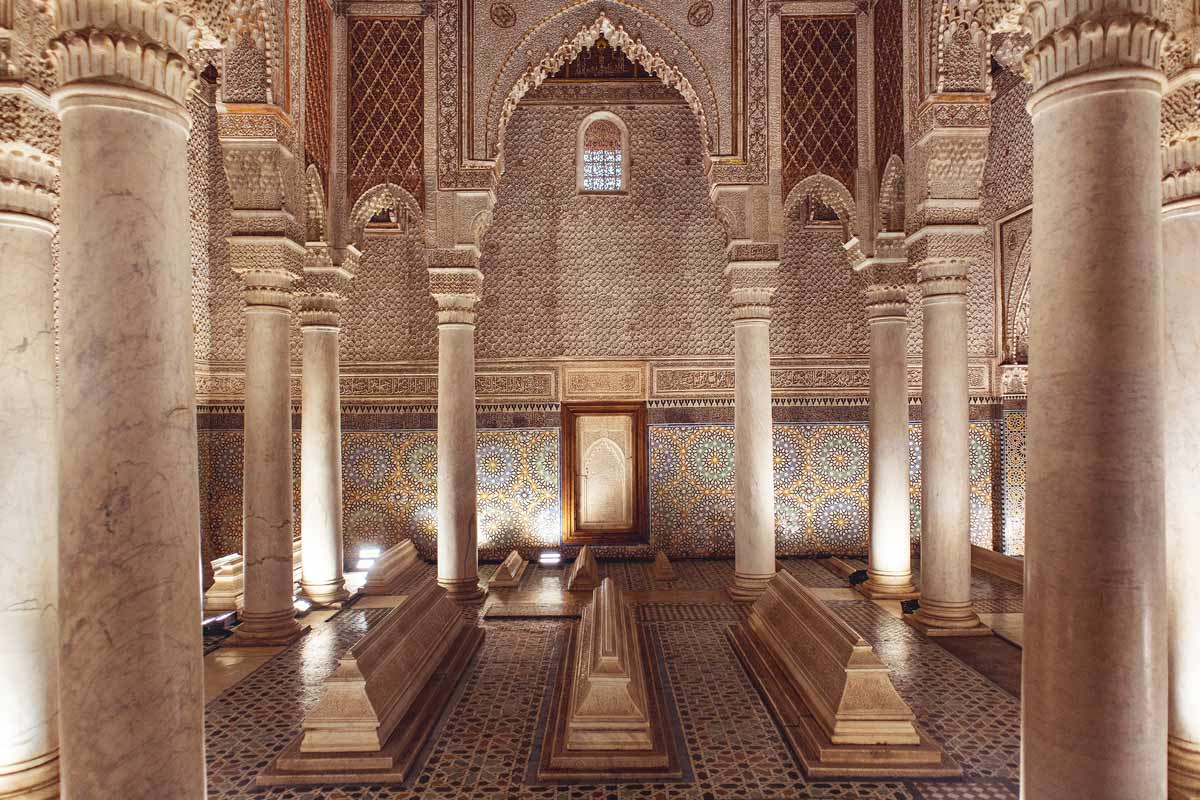 Room of the Twelve Pillars

This opulent style of decoration continues into the hall where curved stalactite arches are the main feature. The walls are decorated with Zellij tiles made from terracotta and covered with a thin layer of enamel. Many are painted with artistic floristic motifs. Zellij tiles are a typical feature of Moorish architecture and you’ll see them in many mosques, palaces and defence structures. They’re commonly used on walls, floors, bathrooms and even tables.

The Room of the Three Niches

The third room of the great mausoleum is where you’ll find the children’s graves. A diffuse light creates a mysterious atmosphere in every room and is particularly striking. This is an effect created by the sun’s rays only partially getting through and then being scattered onto the grave area below.

The smaller mausoleum lies at the centre of the site. It was built with its northern side against the wall of the mosque and is where you’ll find the graves of several close family members and confidants of the Saadien rulers. 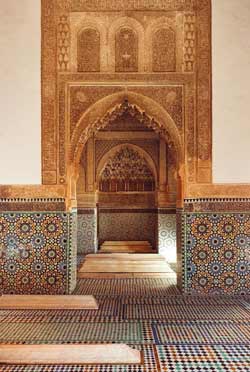 This mausoleum is much simpler than the magnificent interior of the large tomb. Under the eaves of the roof covered with glazed green tiles a ribbon of carved cedar wood extends and underneath is a wider, reticular band. The lower walls of the mausoleum are decorated with faience mosaics.

The northern part of the building has two loggias on opposite sides. These are topped by wonderful gabled cedar structures, each supported by two marble columns. Behind, is a small prayer room and also the tomb of Lalla Massouda, the mother of Sultan Ahmad el Mansur, who was buried here in 1591.

The southern part of the complex has more graves and faience mosaics and bands of lettering decorate the walls here. A very distinctive central arched gate and an Alfiz decorated with arabesques are also features here. The attic space above comprises a small geometric-shaped construction made of cedar wood, partially painted and gilded.

The once forgotten tombs in the south of the Medina are now part of the most interesting monuments in Marrakech. This necropolis is similar to the Alhambra. However, it’s important to note that the Saadian graves are much smaller than the Moorish castle in Granada, Spain.

The small size of the Saadian Tombs complex is particularly noticeable during peak visiting times. When there are a lot of visitors to the site, people queue by the Room of the Twelve Pillars. Anyone who wants to photograph the tomb of Sultan al-Mansur on busy days either has to queue or get there very early. 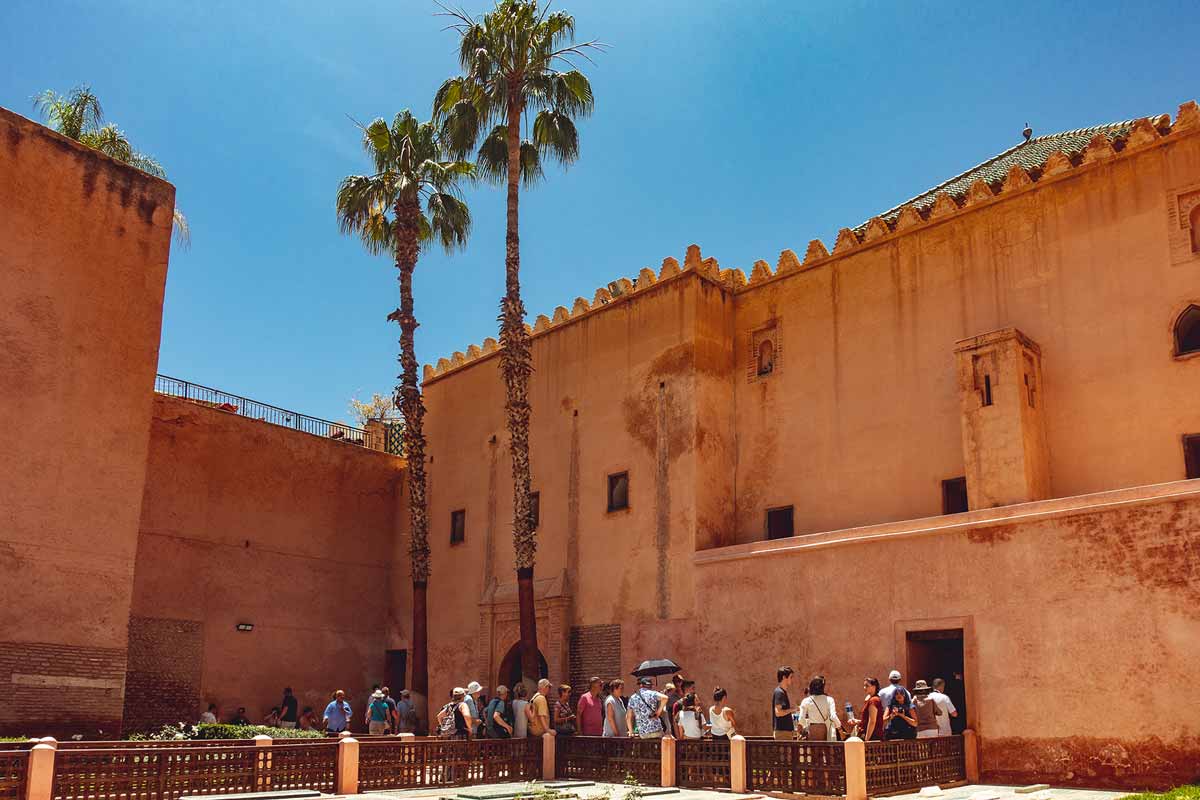 Due to its relatively remote location, it’s a good idea to combine your visit to the Saadian Tombs with another attraction in the southern part of the Medina, for example, the El Badi Palace.

The Saadian Tombs are next to the Great Kasbah Mosque on Rue de la Kasbah. The easiest way to get there is from Jemaa el Fna via Rue Riad Zitoune and Rue Bab Agnaou. From Rue de Kasbah, the route is signposted. Depending on the time of day, this route takes around 15 to 20 minutes when walking.

The entire Saadian tombs complex is wheelchair accessible. However, the width is restricted due to the narrow entrance area.

The tombs are open daily from 9.00am to 5.00pm. Early mornings and late afternoons aren’t quite as busy as peak times.

Entry to the Saadian tombs used to be very cheap at only 10 DH. However, now, adults pay 70 DH to get in. As it’s much smaller in size compared to the Bahia Palace or the Museum Dar Si Said, this is really quite a hefty sum. 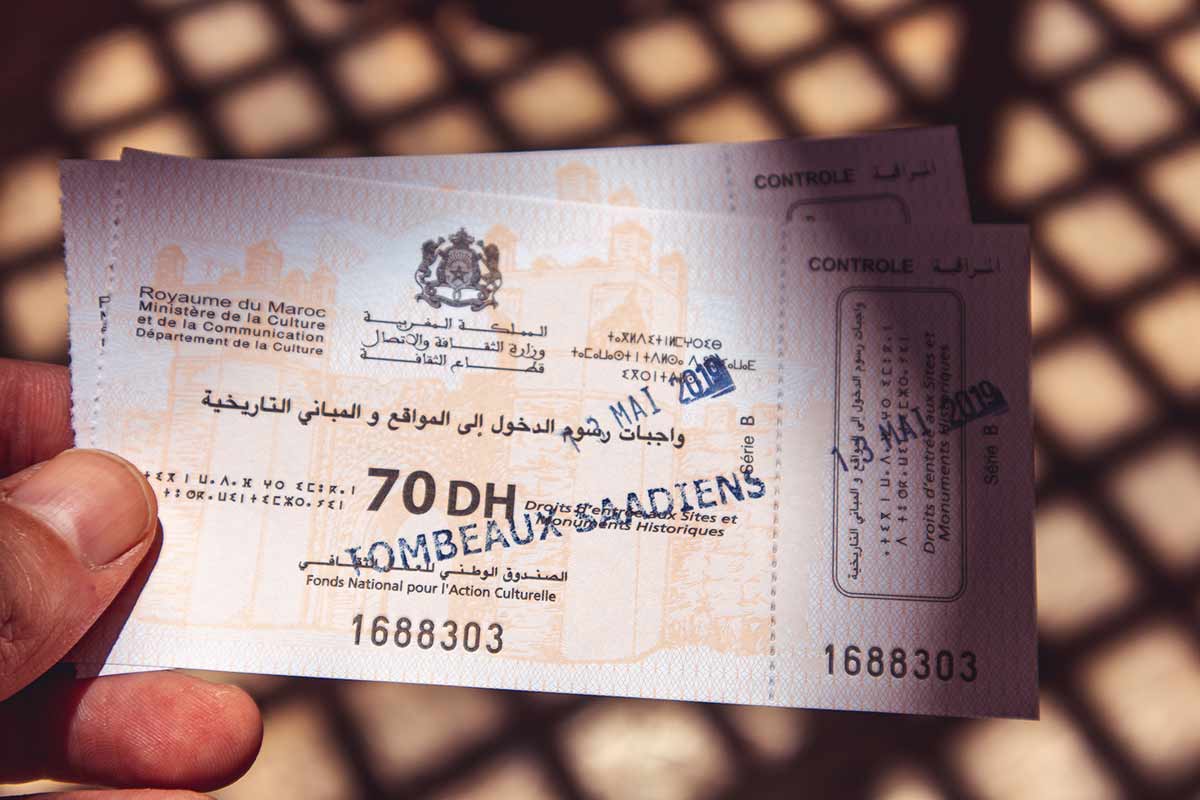 Unfortunately, the rather high admission fee to see the Saadian Tombs doesn’t mean there are fewer tourists