If you’re in Marrakech on holiday and you don’t have a car, there are many modes of transport to get you around. While buses are widely available, the waiting times and crowdedness may prove too much for some.

That’s where taxis seem ideal. They are convenient, and you can find them anytime, anywhere. That said, you’ll need to know a few things before you hop in a taxi.

What’s the difference between a Petit Taxi vs. Grand Taxi?

There are two types of Taxis in Marrakech, petit and grand.

Petit taxis are every beige car model with a taxi sign. They only carry three passengers and operate on a taximeter. They’ll take you anywhere you want. Petit taxis pick other passengers if they are on the way, which is normal.

Grand taxis are easily recognizable by their model, a beige Dacia Lodgy. These taxis carry six passengers or five after the pandemic. They don’t have a taximeter and instead operate at a fixed rate.

Grand taxis won’t take you anywhere in the city. They have designated routes and drop at any point along that route. If you know where you’re going, it’s better to hop in one and stop at the location you want. You can find the Grand taxis in designated stations. There are usually signs. Even if there aren’t any, you’ll know one if you see a group of grand taxis parked.

There are two grand taxi stations in Marrakech that are the biggest. The first is in Bab Doukkala, next to the bus station. There’s a point of confusion that may occur there. Some grand taxis there are for transportation outside Marrakech. To avoid those taxis, a quick question will lead you to the right spot. The taxis there are popular for going to Medina or the Sidi Youssef area of the city.

The second station is at Medina by the prince area. The taxis there go to multiple locations. Most importantly, you can take a ride to the Al-Mazar shopping centre from there. Just be sure to take your seat and wait in the cab to avoid any trouble.

Tip for the Jardin Majorelle

As a tip, if you’re in the Jardin Majorelle and want to go to Medina, you can stop a grand taxi on the street if there are empty seats.

How much does a Taxi in Marrakech cost?

Marrakech taxis’ rates vary between the type of taxi and time of day. So let’s take a look at what it means.

For grand taxis, the fixed rate is 5 Dirhams per passenger, regardless of where you are picked from or where you are going. The taxi price never changes. There is one outlier, taxis that go to Tamansourt. Since the distance is way too great, the rate is 10 DH. For everywhere else, it’s a 5 DH.

Petit taxis are a different beast. The rate depends on the time of day. From 8 AM to 8 PM, the taxi meter starts at 1.70 DH. If you reach your destination before the taximeter hits 7 DH, you must pay that amount. If it goes above 7 DH, you pay what’s on the meter.

From 8 PM to 8 AM, the taxi meter starts at 2.55 DH. If you reach your destination before the meter hits 10DH, you must pay it. If it goes above that, you pay what’s on the meter as usual.

Taxis from/to the hotel and airport

If you’re staying in a hotel and take a taxi stationed there, the meter starts at 10 DH, regardless of the daytime. Keep this in mind if you’re thinking of taking one.

When you take a taxi from Marrakech airport, the rates are fixed and split into two categories depending on the destination.

First, we have Medina. If you’re departing from the airport to there and vice versa, the rate is 70 DH by day and 105 DH by night.

Are there any alternatives to taxis from the airport?

The 19 line bus costs 30 DH per person and leaves every half an hour. It’s available from 6:30 AM to 11:30 PM. The bus is a useful alternative if you’re travelling solo or in a pair.

Another option is a private airport transfer. This transfer is only slightly more expensive than a cab, but it saves you the hassle of negotiating. You can easily book and pay for a private transfer in advance so that you won’t have any stress in Marrakech.

What are some taxi scams I should be aware of?

As with any tourist destination, there are some taxi scams people fall for. Here are some of the most popular ones and how you can avoid them.

The “taxi meter is broken” scam

Some taxi drivers may avoid using the taxi meter by saying it’s broken or pretending to forget to turn it on. They’ll then tell you the rate people ‘usually’ pay.

Never, under any circumstance, accept this. You’ll be overcharged.

If a driver “forgets” to turn the meter on, tell them to do it. When he refuses that, get out of the taxi. If the taxi driver suggests a fixed rate, reject immediately and without any consideration.

The “I’m taking a shortcut” scam

Locals don’t tend to fall for this one. It is more prevalent with tourists since they don’t know routes. Some drives will take the longest road possible to maximize the meter count.

You can avoid this by checking map apps before getting on the cab to know which road is the closest. Please pay attention to what route the driver is taking, and when he takes a longer one, tell him to change the way.

The “No Change ” scam

This one can happen anywhere, but it’s incredibly frustrating in taxis. The driver will tell you that they don’t have enough change for a 100 DH and attempt to take more than the meter reads.

As a rule of thumb, always carry small coins (10s and 5s) and smaller bills (20 and 50s). This money will make it easier to get change and save you a lot of headaches.

The “I’ll drop you on the way” scam

Petit taxis in Marrakech can lift other passengers on the way. Sometimes if you signal a cab with a person in it, the driver will stop and tell you that he’ll drop you on the track or drop the first passenger and then you.

I generally recommend that you refuse and find yourself an empty taxi. You don’t know how far the other passenger is going or if they’re taking a different route that’ll add to your meter count. The opposite is true if they pick a passenger. Make sure they drop you first and follow the most direct route.

Marrakech has really unique taxi types and systems. If you know your routes and plan accordingly, you can quickly move around the city. Just be wary of some of the scams that could occur. Other than that, it’s a smooth and mostly cheap way to get around. 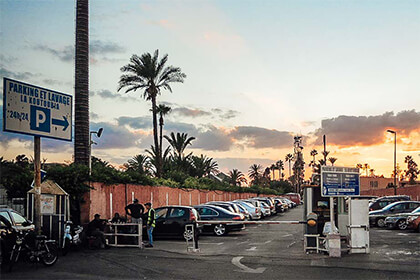 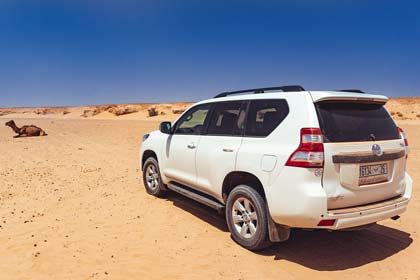 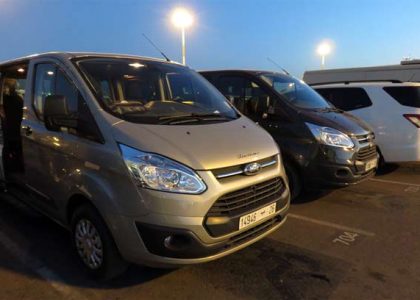 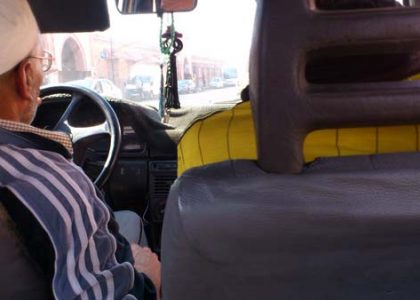